Zen literature presents the following description of a master’s care for his disciple:

“A monk once said to Ts’ao Shan ‘ I am sick all over. Cure me of my illness, Master’.

‘I shall not cure you’, declared Ts’ao Shan. ‘Why?’ asked the puzzled monk.

‘I want you yourself to experience what it is like to hover between life and death’ - was the reply”.

This koan appears on page 199 in Holstein’s book Pointing at the Moon, where he justifies that master’s lack of care for his suffering disciple by the willingness to use his disciple’s pain to teach him a lesson about “the doctrine of emptiness”, understood - in this Zen perspective - as a state "hovering between life and death",  or “where there is no difference between life and death’- as Holstein literally informs.

Needless to say, the humanistic concept of “Duty of Care” applies to the described situation.  A master has a personal responsibility for the safety, health and care of people in his surrounding.  It is in particular towards a suffering person, begging for help and for a cure, that one has a ‘Duty of Care’ to help ease pain and sufferings.

In this koan, the Zen master expressed a mentality of justification for putting his “educational views on emptiness” as his own priority, letting his disciple suffer, without giving help.

The abovementioned koan expresses just the opposite spirit to the essence of Buddhism.  Shakyamuni started his long journey to find a cure to people’s sufferings, to enhance human compassion and to support suffering individuals.

Zen understanding of Buddhism allowed their masters to openly declare indifference towards the sufferings of millions of people during the Pacific War, which they fully supported.  In his book "Zen at War", Brian Victoria provides plenty of documented sources of both Rinzai and Soto Zen leaders justification of the military cult of Emperor Worship and full support of war efforts, including active participation, training of soldiers and donation.

There are many shocking statements of Zen masters interpreting Buddhism as subservient to the military and that the Buddha is inferior to the emperor:

"The emperor is identical to the Great Sun Godess Amaterasu.

He is the supreme and only God of the universe. ...

Stop such foolishness as respecting

Believe in the emperor, the embodiment of the Supreme Truth"   page 117.

War as an "act of compassion":

In his book "The Imperial Way", Zen master Sugimoto states:

"The wars of the empire are sacred wars.  They are holy wars.

They are the buddhist practice of great compassion (daijihishin)

Therefore, the imperial military must consist of holy officers and holy soldiers".

To 'forget the self' means to discard both body and mind.

To discard beyond discarding, to discard until there is nothing left

to discard.... This called reaching the Great Way in which there is no doubt.  This is the Great Law of the universe.

In this way, the great spirit of the highest righteousness and the purest purity manifests itself in the individual.

"Warriors who sacrifice their lives for the emperor will not die. They will live forever.

"Buddhist say that one should have faith in the Buddha, or Mahavariochana, or Amida Buddha,

but such faith is one that is limited to religion alone.  Japanese Buddhism must be centred on the emperor. ....

The Buddhist statues that are enshrined in temples should, properly speaking,

have the emperor reverently enshrined in the center

and such figures such as Mahavariochana and Amida at his side.

It is only the various branches of Zen sect in Japan who have his majesty enshrined in the center....

All of Japanese Buddhism should have his majesty, the emperor as their central object of worship"              page 122

"Through the practice of Zen I am able to get rid of my ego.

In facilitating the accomplishment of this, Zen becomes, as it is ,

the true spirit of the imperial military"   page 124

"Within the military, officers must use this Zen spirit in the training of their troops"     page 124

The book further informs that:

"In June 1942, the Soto sect established The Wartime Center for the Development of an Instructor Corps

to Train Imperial Subjects.  The November 1 , 1943 issue of Soto Shu housed its front page to describe the principles

upon which this center was based. The main principle or goal was the 'increase of fighting power'....

'The practice of Volunteering Oneself for Public Duty, ' ...' Respect the Shinto Deities and Rever One's Ancestors...'

War and death as a way to attain Enlightenment

"The source of the spirit of the Special Attack Forces lies in the denial of the individual self and rebirth of the soul,

which takes upon itself the burden of history.

From ancient times Zen has described this conversion of mind

as the achievement of complete enlightenment'.    page 139 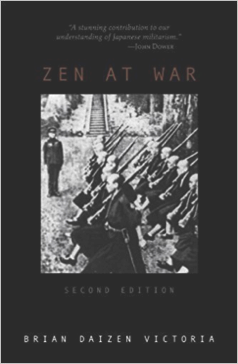 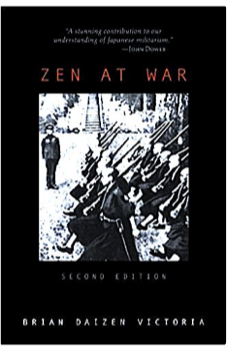