The Flower Sermon from the perspective of the Lotus Sutra

the Flower Sermon is referring to the Lotus Sutra - being the "moon",

while the holding of the lotus plant by the Buddha,

as the “finger pointing to the moon”  .

important, while neglecting the important subject (the message of the Sermon).

In this perspective, Zen is missing the message of the Flower Sermon,

implication of the teachings of the Lotus as a metaphor:

As a flower in a pond, the lotus was generally regarded as a symbol for highly esteemed qualities,

such as beauty, transformation and purity, but The Lotus Sutra goes further than viewing the

flower as a mere symbol: it identifies the lotus both as a symbol - and also as a true manifestation

of the Dharma (the Oneness of Cause and Effect).

The Law of Cause and Effect is the essence of all phenomena, and the  lotus is particularly indicative of the principle of "Oneness of Cause and Effect", because it produces its seeds (cause) at the same time when it flowers (effect).

“The lotus represents both the Law itself and a metaphor for it ”.

and Nichiren adds that:

"What is admirable here is the fact that the Law and the metaphor that is used for it resemble each other.

If they did not resemble each other, then how could the metaphor help people understand the meaning?

That's why the Daichido Ron says that the lotus is both the Law itself and a metaphor for it".     The Entity of the Mystic Law ",

In this light, it can be seen that Shakyamuni was conveying to his disciples the message of the Lotus Sutra, being the final teaching, using the lotus flower both as a symbol for the Dharma, and as a real manifestation of the Dharma itself: The Wonderful Law of Cause and Effect (MyohoRengeKyo).

The Flower Sermon and the concept of "Bodhisattva-Buddha"

As a physical plant in a pond, the flower manifests the natural law of Oneness of Cause and Effect, the principle, which operates all phenomena in reality.

This principle is also operative within the life of Bodhisattvas. The Bodhisattva practice (cause) and  Buddhahood (effect) constitute an integral and inseparable process in the life of the individual.

In other words, the Lotus Sutra erases the distinction between Bodhisattva and Buddha, because it considers the process for revealing one's  Buddhahood as being the individual's actions as a Bodhisattva.

Contrary to the provisional (or pre-Lotus) teachings of Shakyamuni (which required following of Bodhisattva practice over many lifetimes) - in the Flower Sermon the Buddha was pointing to the “Law of the Lotus”, which enables ordinary people to complete the whole process of “maturing” and “harvesting” in this lifetime, leading to attaining  Buddhahood  in one's present form:

Thus we should understand that the objective realm and the subjective being who depends upon it,

-     “A single mind, the entity of  Myoho-renge , simultaneously brings to maturity both the blossom of cause and the calyx of effect.

This concept is difficult to understand, but through the use of a metaphor, it can be made easy to understand.

The teaching that fully sets forth this principle is called  Myoho-renge-kyo ”.     WND1 p 426

As the above passage mentions, the concept of "Oneness of Bodhisattva and Buddha “  …  is difficult to understand, but through the use of a metaphor it can be made easy to understand".  Using the flower as a metaphor for the concept (of the oneness of Bodhisattva and Buddha states) was the profound indication of the Flower Sermon.

Zen - as is the case with other pre-Lotus Mahayana schools - regards the Bodhisattva state as separate from the Buddha state, suggesting “Ten stages of development” of Bodhisattva to reach Buddhahood (if at all). This separation is in fact contradictory to the essence of the Flower Sermon, which indicates - on the example of the physical flower - the merging together of the Cause and Effect - the one vehicle of  Buddhahood  - expressed in the practice of the Dharma of the Lotus Sutra: MyohoRengeKyo. 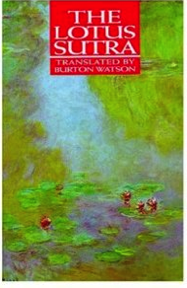